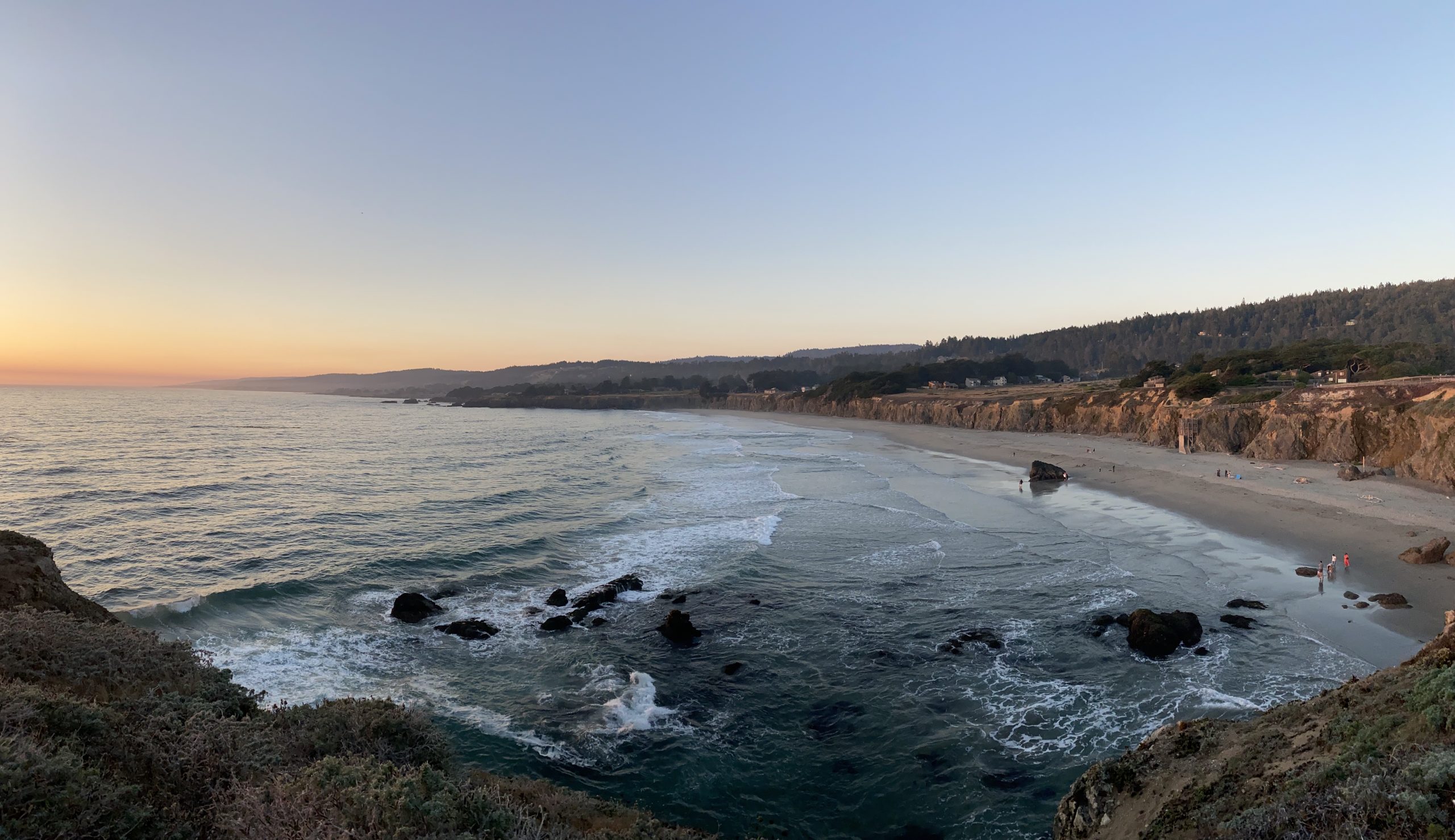 That time my husband and I headed to the coast well-prepared but without a plan, and fell in love with each other — and life — all over again…

Recently my husband Scott and I took a trip to the coast, to escape the smoke. The air had been so bad! So, we got in the car with the intention of just going where we could breathe.

The thing was, we didn’t have any attachment to what the trip would be like. In fact, though we had packed food and camping gear, we didn’t actually know where we would be staying.

This is a story of what it looks like when you don’t have an agenda about how your weekend, or your life, is supposed to look.

Anybody who has created a successful life will tell you… I feel this whether I’m talking about camping or creating LMB Interiors.

I never had any idea of how amazing my life would turn out. This company, the richness in my relationships, the joy and the love, all of the things I get to experience as a human have come as a result of getting up and just putting one foot in front of the next, with a little intention and a lot of faith, every single day.

Unseen forces of the universe respond to the good energy that we are putting out. With practice, we learn that this life can deliver to us something that is so much better than we ever could have imagined

That is how letting go feels to me.

This is a story of one small thing, just one weekend, but that weekend holds for me a tangible model for what our lives can look like when we practice non-attachment.

So there we were, Scott and I. Both open to the possibility of enjoying each others company, wanting to be together. In this story, we just kept following the YESes.

That is how we created the most memorable anniversary weekend of our lives.

Before going on this spontaneous trip, we had already booked a river trip with the kids on our actual anniversary. But as this weekend started to unfold and we realized how epic it was becoming, we agreed that THIS was our anniversary trip.

The weekend began with getting away from Oakland. We started north, drove to Sebastopol, hoping to see Scott’s sister and kids. But they were out of town.

So, we went to The Barlow an outdoor market with food and artisan goods. We happened upon the Head West Marketplace a pop-up fair featuring even more local artists, artisans, and antiques purveyors.

If you know me, you know how much I love pottery, natural materials, local, and handmade.

In one of the booths, I tried on and bought a linen jumpsuit and a linen jacket. Scott took pictures of me.

While we were there, someone accidentally bumped into a display shelf and knocked it over. The owner lost all of her vintage pottery in that moment.

I was so impressed with my husband, the way he rushed in to help. Such an expression of the Divine Masculine. It wasn’t even a question for him. He was right there, taking action.

Throughout the day, as we allowed ourselves to meander through, just witnessing how he rolls with people — interacting out in the world after all these months of isolation… what I saw turned me on. He was in so service, so friendly, a helper…

After the fair, we decided to drive out to the coast. We had stayed at Timber Cove for an anniversary years ago, so we decided to head out that direction, and then up toward Mendocino.

Even finding our way there was a lesson in letting go, not knowing, and following our inner guidance.

We accidentally took a road that took us past Cazadero music camp, and then ended up on another crazy road we had never been on, and still we managed to arrive at Timber Cove.

Except, they were full, of course. They called around for us, to the campgrounds nearby, but all were full.

It was Labor Day weekend, after all.

We never gave up hope, though. That’s okay, we said to each other, something will work out.

The place we went to next, I don’t want to give away the exact location as our campsite wasn’t exactly public… But I can tell you when we got there, it was closed for construction. It was 6pm and we were starting to wonder how the rest of the night was going to unfold, when we happened to run into a groundskeeper in a golf cart.

We asked him if we could sleep in our car in the parking lot.

Scott has a Honda CRV, outfitted with fold-down seats and sleeping pads. Between that and the camping stove, we had come prepared.

The groundskeeper said, “You can sleep in the lot, or I can do you one better.”

And then he invited us to follow him in his cart and we drove out to a bluff overlooking a cove at the edge of the Pacific Ocean. We parked next to a barn and set up camp for the night.

We sat on the bluff on this last exquisitely warm day of summer, with no smoke, breathing fresh sea air, watching the sunset, as sea lions swam by.

The next day, we drove to the Gualala River and swam with river otters. There, we met someone who told us about a special vista, and so we went there and hiked around, exploring.

It was a slice of heaven pie.

In each of those moments, I kept feeling the gratitude. All of my needs were met. Scott and I were prepared and willing, and life delivered. We hit the life-lottery that weekend.

All of the exploring, shopping, the handmade-everything, the connection time with my man, even the music Scott put on as we were driving, chanting that he knew I would like, was so beautiful.

We ended up staying two nights at that same secret camping spot.

Each morning we opened the back of the car, and sat on our makeshift-platform-bed, looking at the Pacific Ocean at sunrise, holding our steaming cups of coffee with lion’s mane and heavy cream that Scott had made for us.

This is Divine Marriage, Divine Union, spiritual practices, tangible evidence of what it looks like when we really do “Let go and let God.”

Being in the energy of celebrating, when it goes well, and really milking it, riding it, keeping it going… we can do this… keeping your foot on the pedal and pumping, like pumping the pedal on the wheel when you are making a piece of pottery.

The brain is inclined toward negativity because its goal is survival.

But we can combat this tendency by actively appreciating these epic joyful life experiences. We can nurture them and keep them alive for as long as we can remind ourselves. This is the gratitude muscle that we can work, and it does keep on giving us more, the more we focus on it.

I can call this work, but I also can call it reveling. Reveling in the good things, appreciating the results of our willingness to be prepared, and let go.